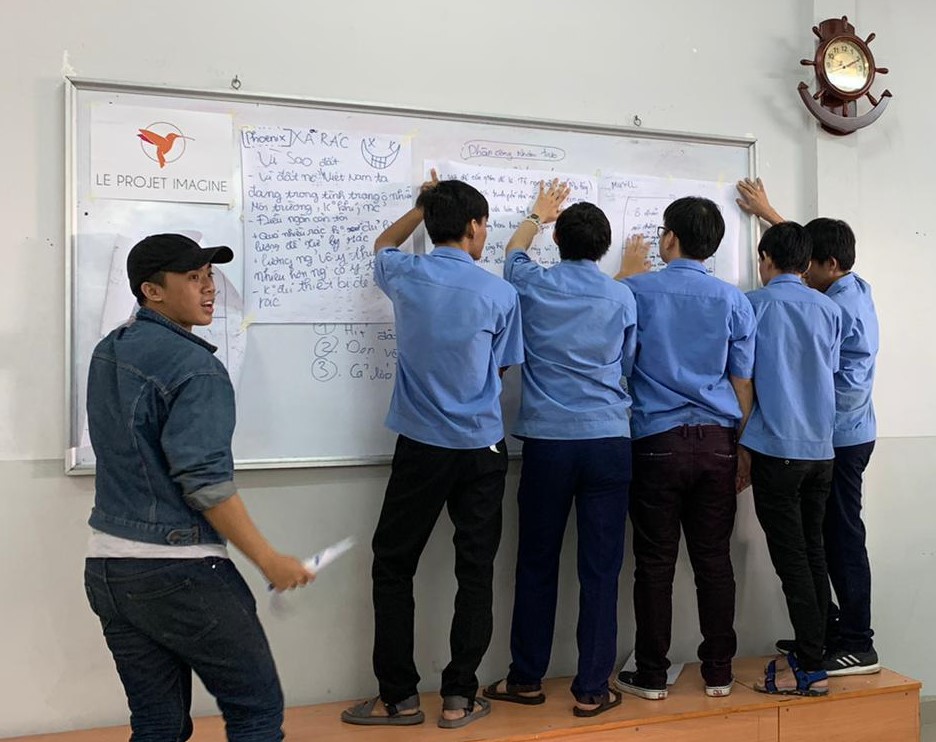 First, a few words about the Vocational Training Center in Hung Vuong: this center welcomes 1000 students each year, between the ages of 13 and 18, who can take a variety of training courses ranging from graphic design to metallurgy, precision machining and electronics. Since 2013, PE&D has been working in partnership with the Hung Vuong center to implement its projects for vulnerable young people.

This being the case, it is only natural that PE&D worked with this school to launch the Imagine Project in Vietnam. The Imagine Schools Program aims to promote the development of younger generations through personal involvement and by enabling them to discover their capacity to act for a more inclusive and sustainable society. The first 7 sessions will be held from December 2019 to March 2020, and should enable students to become aware of certain social issues such as climate change, gender inequalities and migration, while at the same time developing social skills and better self-knowledge. Students will then be asked to complete a project for the next 13 sessions on a topic they will have chosen.

During this first session, we presented the project: goals, expectations and purpose! PE&D teams also announced to the students that they were in contact with GameLoft to organize the ceremony to reward the students’ projects, and this news boosted their enthusiasm.

After a personal presentation by every student, they organized into 4 groups, choosing to name them Phoenix, FBI, Marvel and The Men Who Colored Life. Then they worked together on developing an Imagine School Charter. They were very creative in sharing their ideas and were aware of the fundamental principles of savoir-vivre. Every group has added certain rules that are important to them:

The first group, Phoenix, wants all members to be courteous, avoid using their mobile phones in class, collect waste and maintain their clean work environment. They added that if a person felt tired, they could rest, but out of sight of the other students so as not to disturb the class. FBI shares the ideas of their comrades and for them, it is important not to browse malicious sites in class. Members of the Marvel Group have a definite social conscience and suggested banning plastic, turning off the engine of their motorcycle when entering school premises, and wearing a helmet on the road. Finally, for the last group, vulgar behaviors (swearing, scratching their nose, etc.) should be banned and conflicts avoided.

Every person is then given a role: cleaning the class, making sure rules are recorded and complied with, buying fruit or biscuits for tea break, contacting Professor Danh (club manager) if necessary, etc.

The students then performed the “coat of arms” exercise. This game pushes them to think about current and social issues that directly affect them: which cause is important to us? Why? What is stopping us from working for this cause? How can we overcome obstacles in order to act?

They then exchanged on the topics close to their hearts and we noticed that this kind of discussion is relatively new for students. At the beginning of the session, it was difficult for them to express their point of view, but now they are more easily able to put words on their ideas and share them.

Students are then invited to reflect on the hummingbird legend:

“While a fire was burning up the Amazon rainforest, all the animals were fleeing. All of them, except the hummingbird. The hummingbird would go fetch a few drops of water in its beak, pour the water over the fire, and then start all over again. An armadillo shouted out, “What are you doing, hummingbird? You won’t be able to put out the fire by yourself. And the hummingbird replied, “Maybe, but at least I will have done my part.”

At the end of the session, 24 students signed up to become regular members of the club.

This Tuesday 17th December PE&D team organized our first Imagine session in Nhan Dao Vocational Training School on Establishing the framework for Imagine sessions. The event was attended by 24 students from 2 majors: Graphic Design and Information Technology. We began the session with some warm up games: students took turn to introduce themselves and name the food they like. After that Mr Hoa introduced the project Imagine, the story of Madame Frédérique Bedos and how Le Projet Imagine was conceived. The students then learned about the prize ceremony to be held at GameLoft, which picked their interest because they have all heard of the company.

Mr Hoa then presented the Commitment Shield and have students brainstorm on the social issues they care about. The topics they thought of were very diverse: road safety, littering, robberies & thieves, sexual abuses, HIV/AIDS, unplanned pregnancies that resulted from early sexual intercourses…

It came the time for students to make individual presentations of their ideas. Through pass-the-ball game Mr Hoa selected 3 students to present on their chosen topics: Can (nickname Shiro) introduced the issue of sexual abuse, especially in public spaces – which result in social disorder. Can has not thought of the challenges to resolve this issue but this was a good start. Next, Tuong Vy presented the topic of environmental pollution. This leads to rising risks of diseases among the population. The challenges Vy suggested was lack of commitment from the public, which can be overcome through more awareness raising activities. Up next, Ngoc Son discussed the issue of robberies & thieves.

According to Son, the prevalence of this issue might degrade Vietnam’s reputation. He proposed to have more volunteers to catch thieves, as people believe catching thieves is the job of the police force. Son believed that in order to overcome this issue we need to make the public understand that this social problem is of the whole community. After the activity everyone listened to the story about the Humming Bird, and repeated the commitment phrase “At least I will do my part” while passing a ball around.

The students then write the charter for Imagine Club together. The whole class discussed among each other to finally came to the agreement on 9 rules: 1) members should respect each other, 2) should not do other thing not related to class activities; 3) not using cellphones during class, 3) not littering, 4) not swearing, 5) go to the toilet too many times; 6) not stealing stuffs from the library and 7) mocking one another; instead one should 8) respect the speakers and 9) collaborate with each other.

Members then divide themselves into group of 4-5 to brainstorm the names & slogans and elect a leader for their group. At the end of this activities, we had 5 groups: The three musketeers and a horse (Increase your personal value), The Happy Spies (Everyone is a friend), the Ba Roi Beo (Slogan: For a greener, no-toxic work), the Wibu Never Life (Every creature is a friend, except social evils) and the Whatevers (As long as we are happy). Finally, they signed their names to the membership list and wrapped up the session with a song. 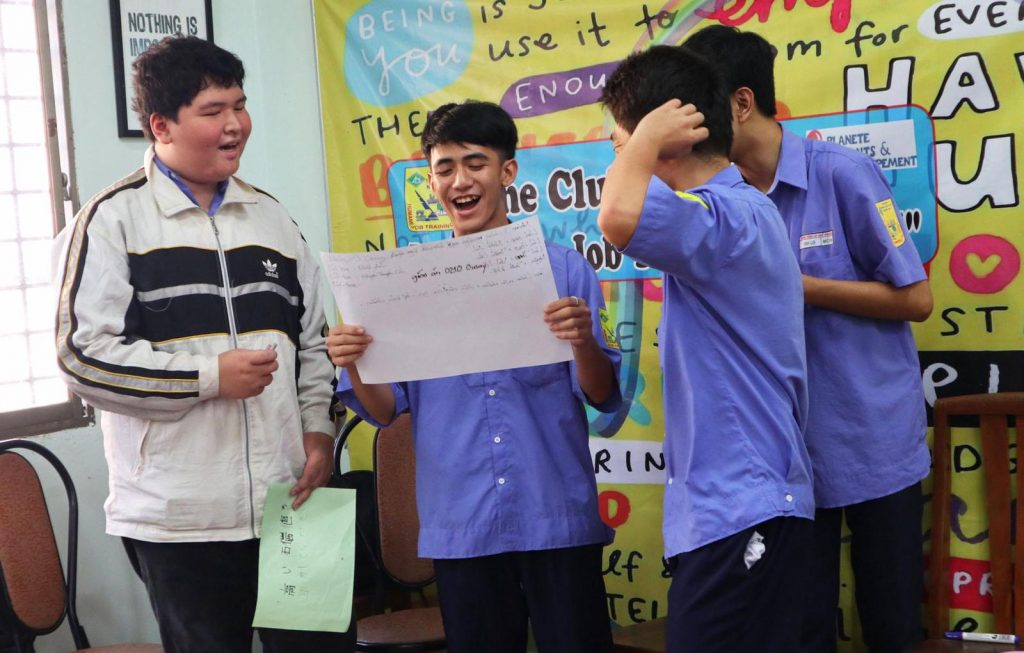